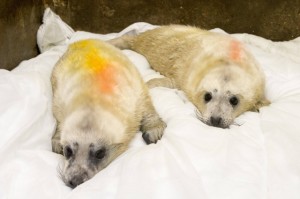 Scientists surmised they may have been twins (an amazingly rare occasion for grey seals) when a female grey seal was found to be nursing two pups a year ago on a shore near Norfolk, eastern England. It appears their hunch was right, as they’ve received confirmation the two young seals are really sister and brother the first recorded grey seal twins on the planet.

Tissue samples from blood in the afterbirth gathered in the sand minutes following the arrival, together with both pups, were sent to The Institute of Marine Research in Norway, where researcher Kirstine Frie ran DNA analysis to ensure the seals were twins. There was some uncertainty as mom seals are well known to nurse two pups at the same time, of which one is their own, plus one of which is not related.

Official records have yet to be located, but this seems to be the first instance receorded of this happening. There have been rumors of double grey seal pups being born in Eastern Europe, says Frie.

I have not experienced it myself, and my British co-workers who do lots of fieldwork have not found it,

Actually, both pups needed to be taken into care after they were apparently left by their mom for 9 days in December, 1 year ago. They were taken in Norfolk, where sister and the brother were named R2D2 and C3PO, and were discovered to be underweight. They have since been released with a shining bill of health.